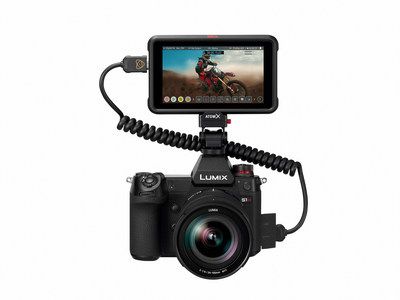 Panasonic is proud to announce the development of firmware for the LUMIX S1H full-frame mirrorless camera which enables the output of 5.9K/29.97p RAW and C4K/59.94p video data to the Atomos Ninja V monitor-recorder. The firmware is scheduled to be launched in early 2020

Panasonic has a long history of collaboration with Atomos.  This relationship will deliver new RAW video functionality for the S1H.  5.9K up to 29.97p and C4K*3 up to 59.94p in RAW delivered over HDMI is in development. With this firmware Apple ProRes RAW can be recorded on the Atomos Ninja V.

A LUMIX S1H prototype with this firmware will be exhibited along with the Atomos Ninja V in the Panasonic booth (Booth No. C45, Hall 11) at the IBC2019 (International Broadcasting Convention) to be held in Amsterdam, the Netherlands, from September 13-17, 2019.